Germany, throughout much of its history, has been at the forefront of art and design, and no exception is made when it comes to interior design. Designers like Ludwig Mies van der Rohe and Walter Gropius have led the way in making Germany a leader in architecture and design, with brilliant furniture pieces iconic of the styles. Get a taste for German design in looking at the following three specific styles.

Very much a German innovation, industrial interior design is considered by many to have been created by German architect Peter Behrens. Similar to other German design styles, industrial interior design embraces raw, pure, unfinished materials. It is about displaying materials that many try to conceal and using pieces that are as much about function as style. Commonly featured elements include utilitarian objects, neutral tones, and metal and wood surfaces.

If a warehouse look comes to mind, you’re not too far off. Industrial interior design in Germany is often seen in warehouse apartments and office spaces, with exposed pipes and ducts, white walls, and other “unfinished” elements very much a part of the design. Dangling bulbs as a form of lighting are industrial. Concrete walls and stainless-steel appliances are industrial. The German concepts of sleek and man-made concepts of sleek and man-made are industrial at their very core.

Industrial-style furnishings are normally inspired by old factory and laboratory pieces. One particular piece that is a must-have for your home if you want to incorporate German industrial design is the industrial sliding door. There are many different interpretations of this door, but to be truly industrial it will typically be crafted of wood and metal. This particular door is made of brushed steel, solid alder and a soft brown leather. Get it for your man cave or set it up in a kitchen with concrete floors and high-reaching white or brick walls and you’ll soon find yourself living in the German industrial age. Minimalist interior design is prevalent in Germany and has spread to many other parts of the world. Those who appreciate minimalism strive for less, because minimalism is just that—less. It is less color, less visual noise, less stuff. It is simple, restful, and brings a sense of order and focus. And Minimalism isn’t necessarily about getting rid of things; German architect and designer Ludwig Mies van der Rohe perhaps said it best when he coined the term, “less is more.”

Minimalist designers strive to strip everything down to its base and most simple quality, and this is evident in how Minimalist design is made manifest in Germany. It is seen in architecture, art and interior design. Buildings are made of base materials like wood and concrete and great attention is placed on austerity and space. Minimalism is similar in ways to Modernism and so shares some design elements with this style. Elements like barn door hardware add to the feeling of minimalism.

If you’re looking to have a German minimalist feel to your home, you’ll undoubtedly need a Barcelona chair. This chair is perhaps the quintessential piece when it comes to minimalist interior design in Germany. Designed by Ludwig Mies van der Rohe and Lilly Reich, the Barcelona chair was created for Germany’s entry into the International Exposition of 1929 hosted by Barcelona, Spain. The iconic piece features a chrome-plated steel frame with leather cushions. Its design is simple, sleek and unassuming. 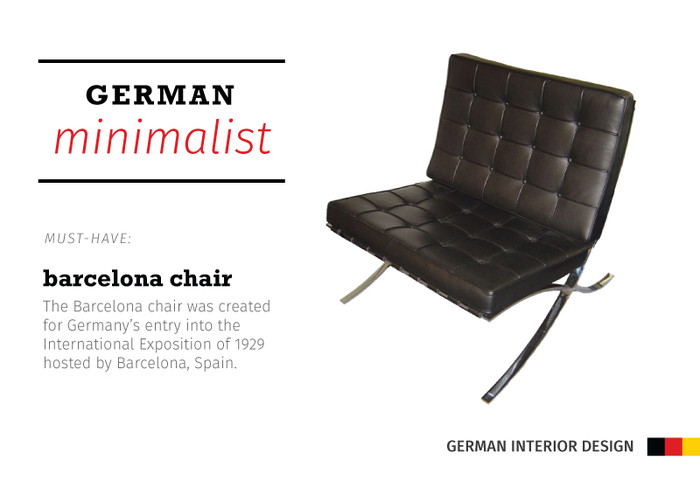 More than just a design style, Bauhaus actually began as a school and turned into an entire movement. German architect Walter Gropius created the school with the idea that art, architecture and design need not be separate, competing elements but that they should be brought together and studied as elements that can work cohesively and complement each other. Started just after World War II, the Bauhaus movement is characterized by simplicity, economic sensibility and a focus on mass production.

Because Bauhaus design teaches “truth to materials,” materials are used in their “honest” form. In abiding by this concept, much of Bauhaus-inspired architecture and interior design in Germany use exposed, raw materials. The frames and supports for sofas, chairs, tables and lamps are usually constructed of steel tubing. This machine-made, mass-produced element to Germany’s Bauhaus furniture helps create simple forms that require little upholstery and contribute to the modern, streamlined look of Bauhaus furniture. 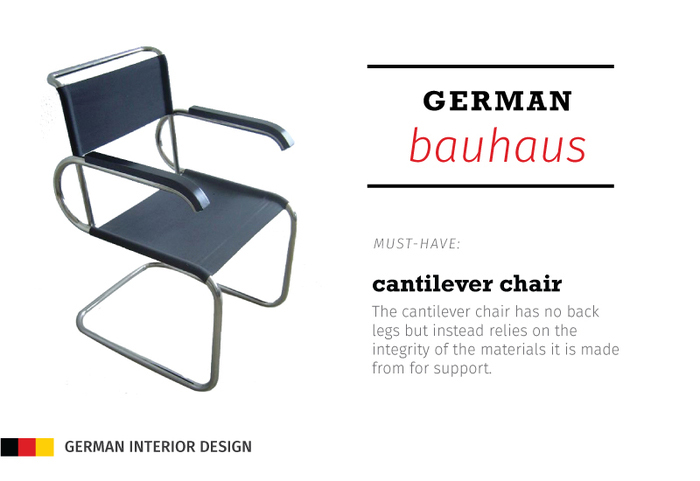