French country interior design comes from, of course, the French countryside in cities like Nice, Marseille and Cannes. These cities found in the south of France are the birthplace of this rustic yet elegant interior style that has since charmed its way into homes all over the globe. This style is relaxed and soft with touches of classic French elegance to remind you of the country’s rich history. It is reminiscent of everything good about living in the country.

Country interior design is not unique to France only; there are also country interior designs that have English and American influences. While all country design styles share common elements, French country design is distinctly so. This style incorporates arched windows and doorways, chairs with rounded backs, and dazzling chandeliers as lighting. These pieces stand out as French, and obviously so when paired with rustic, country pieces such as distressed furniture and wooden beams. You’ll also find wrought iron accents in the kitchen, as part of accessories, and elsewhere throughout a French country home.

It’s difficult to pick out one distinctly must-have piece of French country design because there are so many elements that work well and add to this style. However, you can’t go wrong with some kind of vintage, distressed armoire or set of drawers. Try to find an authentic antique piece of furniture; there are thrift shops and online stores that sell beautiful barn doors. If one is hard to find, you can get a modern door or barn door with barn door hardware and paint and distress it yourself. Painted white and then antiqued with sandpaper, a modern door can be easily turned into a classic French country piece. Vintage carved and upholstered chairs are also a beautiful option. Consider a Louis XV-style carved and upholstered fauteuil armchair. 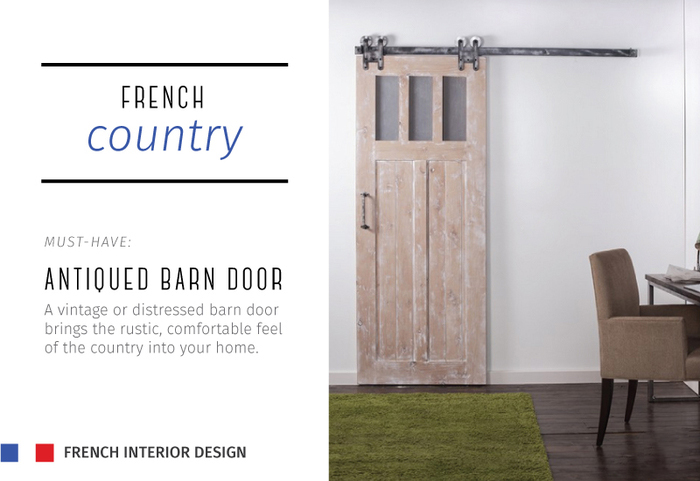 Eclectic interior design is often a unique blend of patterns, textures and furnishing styles that draw inspiration from different cultures and time periods. Traditionally used in reference to architecture, French Eclectic style was most popular in the United States in the 1920s and 1930s and was also known as French Provincial or French Chateau style. American soldiers who had served in France in World War I came back with a familiarity and knowledge of French architecture and interior design and were eager to recreate what they had seen.

French eclectic interior design, like other eclectic styles, draws from a various cultures and time periods. The different elements and pieces work together to create a style that works; everything is somehow integrated and cohesive. The style often incorporates pieces that are of 18th-century French origin as well as those that are distinctly Victorian. Mix antique and vintage elements with newer, modern items. Find furniture that is feminine and has intricate detailing and weathered finishes. Decorate with varied patterns and textures and French-style artwork on the walls. 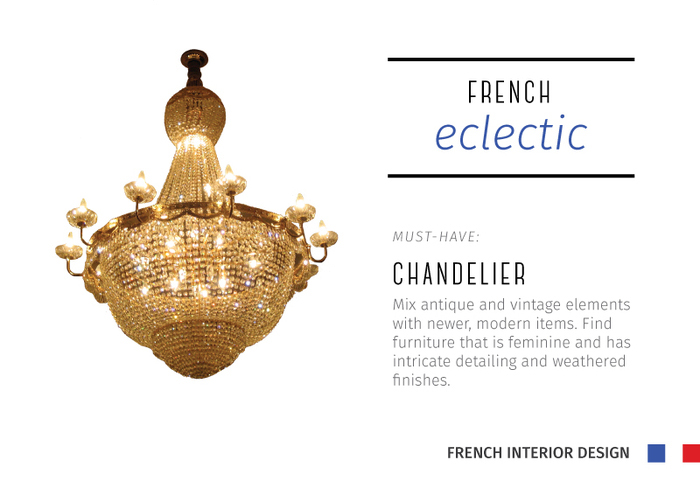 Traditional interior design celebrates elegance and comfort. It takes its inspiration from the past and creates a look that is refined, dignified and warm. It’s a timeless, classic style that originally comes from Western homes built during the 18th-19th centuries, from 18th-century England and the French countryside. It’s a style that is still popular all over the world with each country adding their own touches.

If you want to bring the classic French traditional feel into your home, there are several elements you can look for, but one that maybe stands out a little more than the rest is a living room fireplace. A gorgeous fireplace and accompanying mantel becomes the focal point of any living room and invites a luxurious French feel. Position sofas and armchairs around the fireplace, light a glowing fire and pass around cheese and fruit—you’re sure to start feeling a little more French in no time. 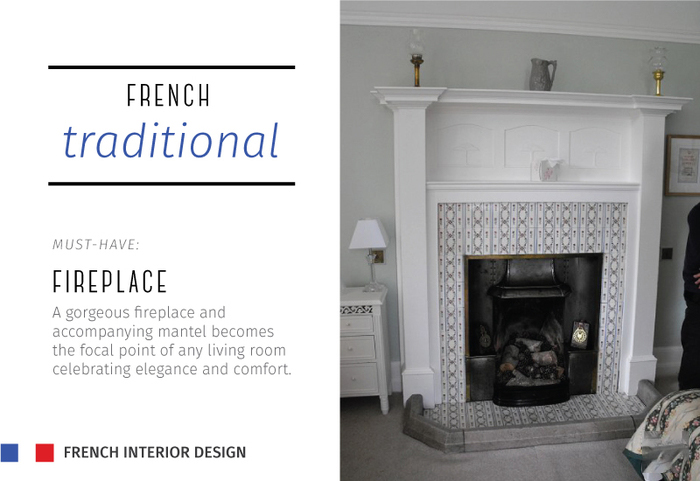